Eunice Odio (1919-1974) was a Costa Rican poet who lived most of her working life in Guatemala, New York, and Mexico City, where she died. Her work has come under renewed critical attention. She was an eccentric, prophetic poet who lived "outside the mainstream (perhaps purposefully so)," wrote Sharon Mesmer in the American Poetry Review in 2013.(1)

This breezy letter, one of many from Odio in the López Vallecillos archive, evokes the close trust that developed between the publisher and the poets he championed. As if transcribing a phone call, Odio asks Italo about contracts and book deliveries and then says she must break off because she's cooking dinner for some guests who will arrive soon.

Today at noon I received your letter and the contracts. I will return them to you tomorrow, signed and certified and for immediate delivery, so that they arrive sooner and safely (although this is relative).

At the same time that I sent you my book I sent you El Rastro de la Mariposa [The Path of the Butterfly] and En defensa del Castellano [In Defense of Castilian] but you do not mention anything about receiving that other piece of mail. What happened? Didn't you receive those books, which also went by certified airmail and with immediate delivery?

I've got to run to the kitchen because one of Juan Liscano's daughters is here and tonight I will receive her together with a few friends; and I have to prepare a few things for dinner and everything else, before the invited guests arrive.

Greetings to you, Carlos Martínez Rivas and Alfonso Chase. Til next time, 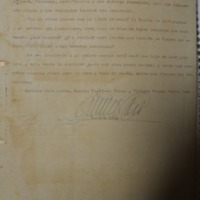